We have such heated debates on ethical and moral topics. Everything on life and death, gender and sexuality, lifestyle and marriage. Regardless of where we stand on any of these, the way we approach a conversation about them, also speaks volumes. Distasteful approaches often leave me wondering if we have forgotten the basics.

On the one hand we have heightened political correctness that demands sensitivity at every turn with no room for error. The fear of not wanting to hurt anyone’s feelings with their opinion can cause people to go without voicing their concerns at all. Yet, on the other hand we also have a very heavy handed; –

‘you’re wrong! And you need to be taught harshly why’

as a form of rebuttal. Well of course we disagree, there would be no debate if we all agreed on everything, but must that disagreement be put forth with such brutality and harshness?

The intention behind those who wish to be as sensitive as possible, to minimise harm done is a good quality to possess. Those who feel they have the obligation to share the truth that is being silenced, also a good quality. However, often in order to be heard some people shout on top of the deafening silence or use whatever means necessary to prove the truth. It may even be loud, rough, and sometimes rude. Now, you might say

‘Truth is truth, and I make no excuses for it’

and that’s fine, I get that. But our lives are filled with interaction. We interact with people; we have an effect on the other; people with minds and hearts. Minds and hearts that deserve our respect even if we disagree with them, that deserve to be heard even when they try to silence us, that deserve our love especially when they hate us. I’m not saying we should retract the truth to make this happen. Never. But are these two our only options?

Perhaps the trouble is in fact that we feel as though we live in a court room and that we do indeed need to defend the truth at every turn. This may well be the case, but are our words and actions based on mere emotional response, a passionate response if you will; Or do we allow God to speak through us? We have been granted an advocate, someone to speak on our behalf, someone who will defend the truth. Although the advocate may well speak with sternness and clarity, He also ALWAYS speaks with charity. He is after all one with Love. So, what is really going on here for us? Are all our defences the work of the Holy Spirit, or can we humbly admit that sometimes, we allow our passion and emotion to take over?

This is a familiar justification,

‘Jesus was justly angry when people turned the temple into a marketplace, and he expressed that anger.’

Of course, he was justly angry. Those people knew better, and they still turned the father’s house, a sacred place of worship into a marketplace of monetary profit at the cost of the poor. But Jesus also showed that there was a time and a place for that Just anger and uproar. Otherwise, he would also have been in uproar when Mary Magdalen was being stoned, or when Judas betrayed him, when the Apostles fell asleep AGAIN instead of keeping watch, or when Peter denied him 3 times. Jesus showed Mercy and True Love. He showed them the truth by correcting the wrong, but he was compassionate. This is also what we are called to do. Speak truth but speak it charitably. As Christians we’re called to be like Christ, yet are we using the temple marketplace as an excuse to disregard compassion and charity? Perhaps we have bought into the lie that anger, force, and brutality, governed by our passions and emotions is actual Christian zeal. When more often than not, these very words and actions have silenced the work of the most charitable advocate.

So what can we do?  Perhaps we can start by tossing excuses such as

‘I’m not so gentle so I’m just going to be brutal’.

If we know that gentleness is not our forte, then all the more reason to be additionally cautious and to practice gentleness, not to simply dismiss it and unleash the opposite. As if that statement somehow nullifies the action taken. Instead, we can spend time asking what role the advocate plays in our lives; Or better yet, what roles we allow him to and then to ask God to show us what we need to give up or let go of to allow the Holy Spirit to move in our speech, our actions and our thoughts; allowing him to transform ourselves into the very temples we were created to be; a temple of true love. 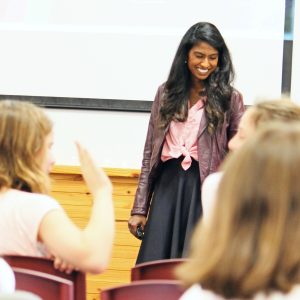 Stina was born and raised a Norwegian and completed her Bachelor of Psychology and Master of Social Work in Australia. She currently works in both the post-separation sector and supporting families with children diagnosed with cancer and other life threatening illnesses, whilst also being the current Young City Female Ambassador for Wagga Wagga, NSW.